“In 1989 I started trying ollie 540’s as a joke, since it seemed there was no way to keep a skateboard on your feet throughout 1 1/2 spins in the air. But at some point I started scooping the tail with my back toe, which kept my feet in place for most of the spin. When Stacy Peralta came to shoot my segment for Ban This, I decided to finally make one since he was using ultra high-speed film cameras. You can see the progression of my feet staying on with this [unseen] raw footage of my attempts, before finally landing one… in a full squat, with hand dragging behind. It was the first of many that I’ve made over the last 32 years, and my technique improved as time went on. But they’ve gotten scarier in recent years, as the landing commitment can be risky if your feet aren’t in the right places. And my willingness to slam unexpectedly into the flat bottom has waned greatly over the last decade. So today I decided to do it one more time… and never again.” - Tony Hawk

ONDREJ ZUNKA COLLECTION
ARTIST STATEMENT
I'm a digital artist but not many people know I'm also a BMX rider. I remember the exact moment I first came across the first Tony Hawk pro skater game. That's why I got really excited about the opportunity to work on a project with Tony. What really blew my mind is that Tony really understands the 3D art process. He told me he used to work in Lightwave 3D.
At first, I was like what am I going to make?! How do I do justice to Tony and the culture he helped to create. I spend a lot of time around skateparks and there's always a lot of graffiti everywhere so I made this public “Graffiti wall” inviting friends, family and the public to add a note to Tony. I’ve created a texture from all of these messages and projected them onto the ramps so whoever participated is now part of these two NFTs 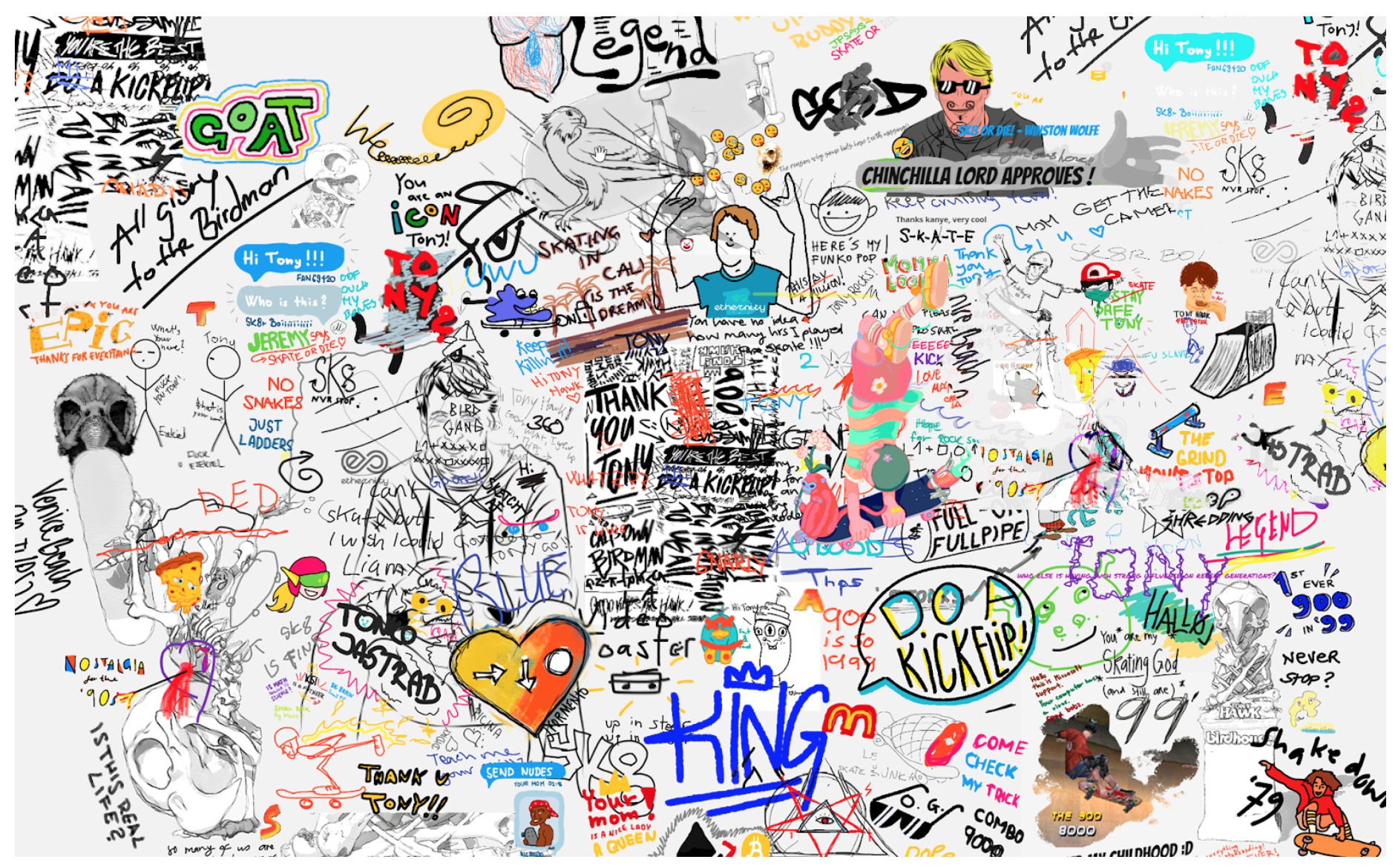 NEVER MISS A DROP
Subscribe to get alerted for future drops and updates
In the press
Soccer Icon Pelé Becomes Latest Sports Star to Enter NFT Craze
The Pelé NFTs are launching on Ethernity Chain, which also has deals with baseball star Fernando Tatis Jr...
NFT Tokens to Keep Your Eye On
While 2020 might have been a big comeback for cryptocurrencies and the beginning of DeFi’s ascent, 2021 is all about non-fungible tokens (NFTs). NFTs are by...
MLB star Fernando Tatis Jr. plans NFT release next month
Tatis, Patrick Mahomes and Rob Gronkowski have all gotten into the game. The shortstop, who recently signed...
Legendary Skateboarder Tony Hawk to Auction NFT of Trick Footage
Tony Hawk joins a growing list of celebrities digitizing and selling their collectibles as...
"NFTs Are The Perfect Bridge Between In-Game Items & Real-World Value" - Nick Rose of Ethernity
Ishan Pandey: Hi Nick, welcome to our serie...
Muhammad Ali NFT Minted 50 Years After ‘Fight of the Century’ With Joe Frazier
Muhammad Ali is being memorialized in non-fungible token (NFT) form 50 years on...
Ethernity Chain partners with BossLogic to launch exclusive NFT auction
Under the new collaboration, BossLogic will create 2,500 NFTs exclusively for the...
Non-Fungible-Token Market Booms As Big Names Join Crypto’s Newest Craze
For some time now, institutional interest in the crypto world has...
Winklevoss Twins, DJ Alesso Back Crypto Collectible Artworks up for Charity Auction
Ethernity, a new non-fungible token (NFT) art project, is set to auction off digital artworks...
All-Star Celebrity Line-Up Launches Ethernity - A Debut Collection of NFTs
Winklevoss Twins, Swish DJ Alesso, and 76ers owner Michael Rubin debut digital ...
AboutHow it worksApply as an ArtistTerms of UsePrivacy Policy
© 2021 Ethernity, Inc. All rights reserved